Stephanie Langston is a Lecturer of Spanish at Georgia State University, Perimeter College. She teaches face-to-face, hybrid and fully online classes. She leads Spanish instructor trainings for all campuses of Perimeter College and was the first Spanish Instructor to teach online for the college. She also taught for the Georgia Institute of Technology and Oxford College of Emory University. Her degrees are from the University of Georgia and she also studied in Salamanca, Spain and in San José, Costa Rica. She has created Continuing Education programs used by the University of Georgia, the Florida College of Advanced Judicial Studies, AMN Healthcare, the National Pharmacy Technician Association, and the American Academy of Orthotists and Prosthetists. She also led the development of 200 hours of Spanish curriculum customized for the Immigration and Customs Enforcements Agents of the Department of Homeland Security.

She lives in Monroe, GA with her husband, Chris, her son, Emery, and her daughter, Maya (both adopted from Bogotá, Colombia). They are active in their church and are avid travelers (47 countries and counting). She enjoys swimming, biking, singing, dancing, doing triathlons, playing the piano and playing tennis. She is also an adrenaline junky and has talked her husband into hang gliding in Rio, paragliding in Austria, skydiving in the U.S. and scuba diving in the Great Barrier Reef. She has had the honor of being on the radio in Costa Rica (a singing promotion for a national station and for an interview of international students) and of being on television in Spain (as part of an interview of international visitors during the Corpus Cristi festivities in Toledo). Her most pressing current challenge is keeping the peace between two children who are diametrically opposed.

Pharmacy Spanish
Spanish for the Courts 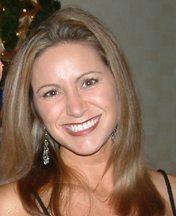