The Peach State Louis Stokes Alliance for Minority Participation (LSAMP) Scholars Program has helped propel the academic pursuits and careers of countless Perimeter College students and alumni. Peach State LSAMP, funded by the National Science Foundation, is an ambitious initiative aimed at increasing the number of Georgia’s underrepresented minority students who complete undergraduate degrees in science, technology, engineering and mathematics (STEM).  From Georgia State University’s Perimeter College, LSAMP scholars go on to study in areas like neuroscience, electrical engineering and biochemistry at respected institutions such as the Georgia Institute of Technology, Dartmouth College, the University of Georgia and Georgia State University.  Even before graduating with their two-year degrees, LSAMP enables participants to spend summers engaged in Undergraduate Research Experiences at prestigious universities like Emory, the University of Pennsylvania and Florida Institute of Technology. Once earning their bachelor’s degree, many go on to pursue advanced degrees in STEM related majors before entering the workforce and pursuing their professional goals.  Do you have an interest in or passion for STEM? If so, we hope you’ll consider becoming  Perimeter’s next Peach State LSAMP scholar.

The Peach State Louis Stokes Alliance for Minority Participation (Peach State LSAMP) is a collaborative effort sponsored by the National Science Foundation (NSF) sustained by a coalition of six Georgia colleges and universities, including Georgia State University’s Perimeter College. LSAMP’s goal is to significantly increase the number of underrepresented minority students statewide who complete undergraduate degrees in science, technology, engineering, and mathematics (STEM) fields through the implementation of a comprehensive and integrated series of recruitment and retention initiatives that address key transition points from undergraduate recruitment to graduate school preparation. The promotion of undergraduate research also is a key LSAMP strategy.

The University of Georgia serves as the lead institution for Peach State LSAMP. In addition to Georgia State’s Perimeter College, other participating institutions include Fort Valley State University, Georgia Institute of Technology, Kennesaw State University—Kennesaw Campus, Kennesaw State University—Marietta Campus (formally Southern Polytechnic State University), and Savannah State University. Each school provides services that assist underrepresented minorities with the transition from high school to college, integrate them socially and academically into the university environment, and engage them in research and summer internship opportunities. Additionally, in an effort to meet the needs and expectations of underrepresented minorities in STEM, Peach State LSAMP provides services such as academic enrichment, financial support, peer and faculty mentoring, research opportunities, and summer bridge programs.

The alliance focuses on individuals who are American-Indian, Alaskan-Native, African-American, Hispanic/Latino, Na- Native-Hawaiian, other Pacific Islander (Guam, Samoa, and Papua New Guinea) or multi-racial comprising one of these categories.

All scholars must be a United States citizen or permanent resident. 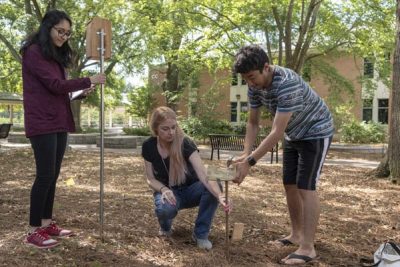 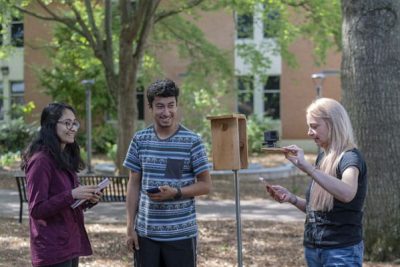 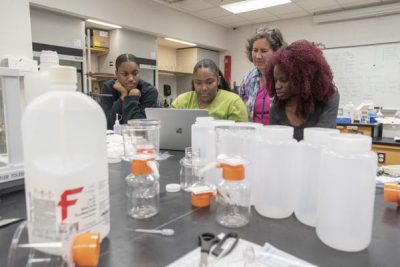 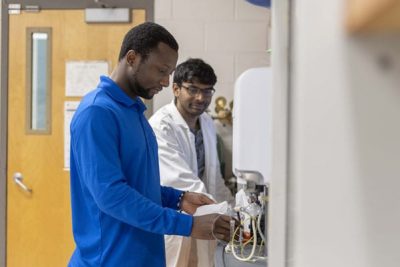 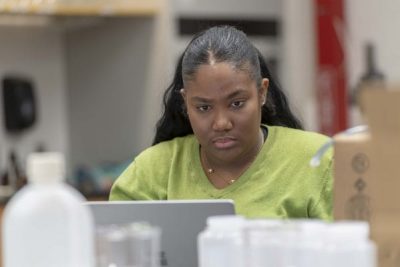 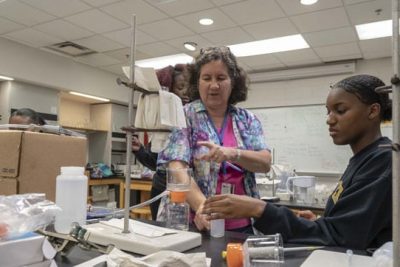 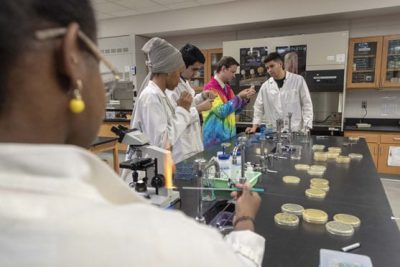 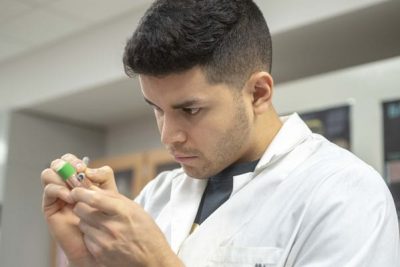 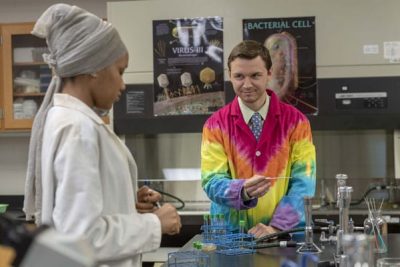 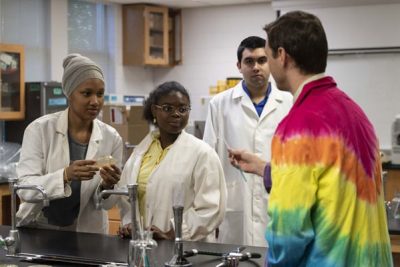 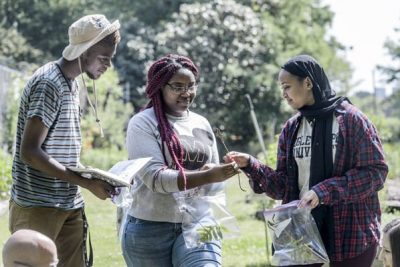 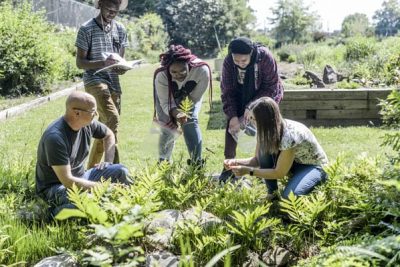 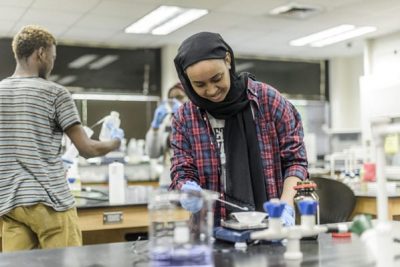 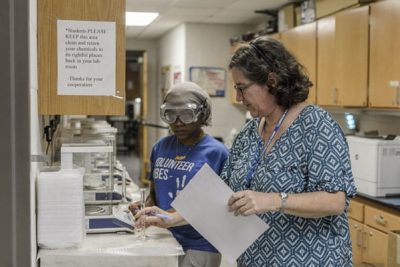 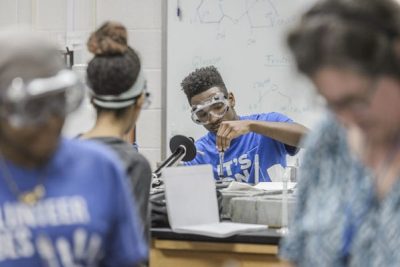 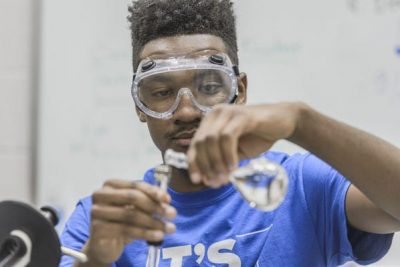 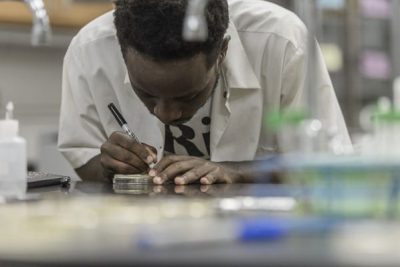 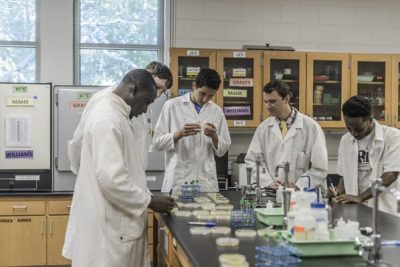 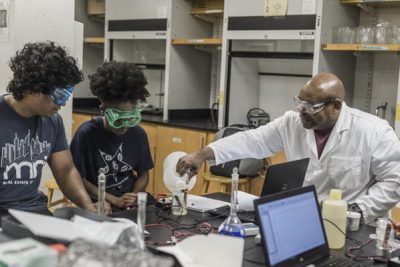 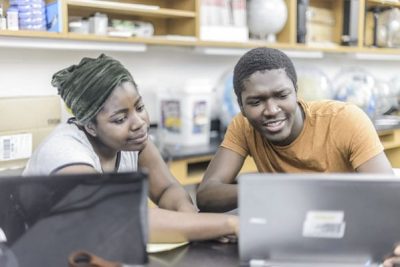 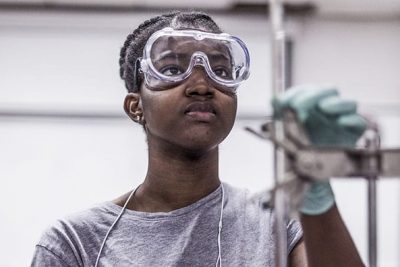 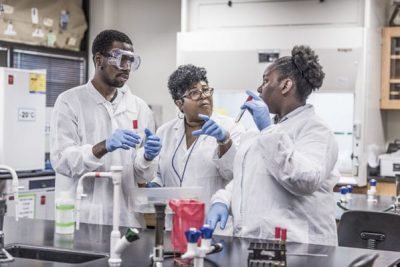 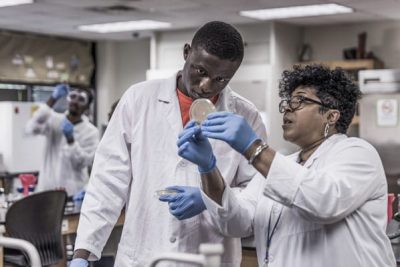 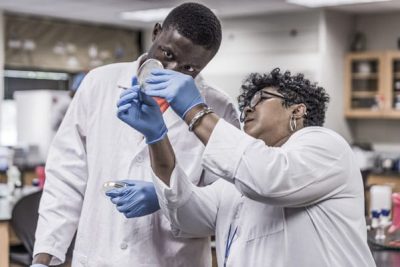 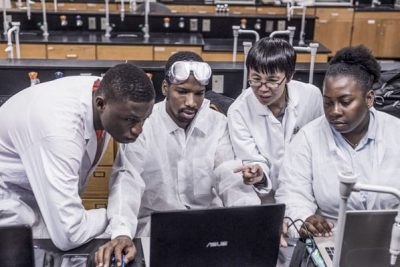 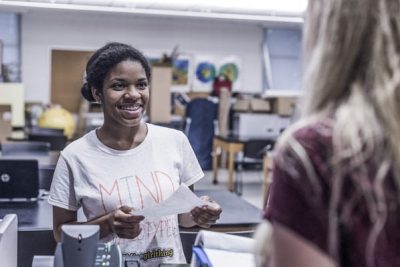 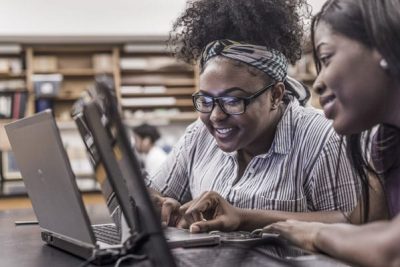 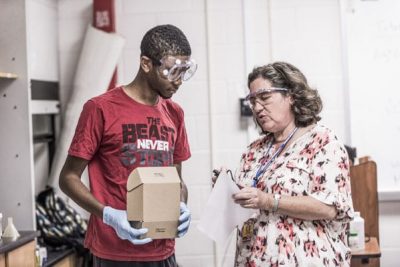 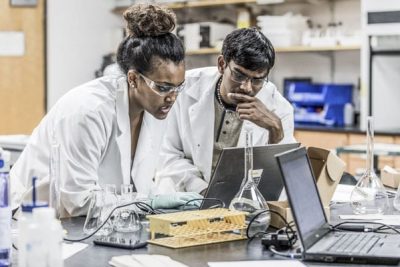 A trip to NASA’s Kennedy Space Center for a robotics competition and a research project in Boston to work on products for space satellites — these are just two of the research opportunities Alana Burrell received while involved in the Peach State Louis Stokes Alliance (PSLAMP) at Georgia State University’s Perimeter College.

Burrell, who graduated in 2019 from Perimeter, is now a junior pursuing a dual degree engineering track in computer engineering and computer science at Spelman College.

She is one of four panelists who will be speaking Dec. 4 about how their experiences in the college’s PSLSAMP program have helped shape their career goals as they pursue their baccalaureate degrees and beyond. The other panelists are PSLSAMP alumni Micayla Shirley, Waheeda Nur and Samiro Hussien. The virtual program is at 1 p.m., Friday, Dec. 4. Click here to view.

Burrell cites the direct impact of joining PSLSAMP at Perimeter as the catalyst for all of her involvement at Perimeter College and her current research interest in computer engineering.

“PSLSAMP was one of the most transformative and beneficial programs I have ever participated in my academic life so far — just because of how much it has helped me figure out where I want to be,” Burrell said. “It gave me opportunities to do research projects and made me aware of academic- and government-focused career paths that I had previously been unaware of.

“Plus, there’s a great community of alumni ready to help you,” Burrell said. “The alumni network of PSLSAMP is unbelievable and will allow a student to connect to almost any conference or major presentation. PSLSAMP offers great scholarships for undergraduate   students and even better ones for graduate-degree-seeking students.”

Burrell credits her PSLSAMP adviser, associate professor of science Ilse Ricketts, for helping guide her along the way.

“She’s been a role model and mentor and really has been pivotal to me for a lot of things I did at Perimeter and beyond,” Burrell said. “She encouraged me to apply to research and internship opportunities that I didn’t believe I could make it into. This was something I didn’t get anywhere else.”

Fiddler crabs are on Micayla Shirley’s mind a lot lately.

Shirley, an alumna of the Peach State Louis Stokes Alliance for Minority Participation (PSLSAMP) at Georgia State University’s Perimeter College, is working on her degree in biology at Georgia Southern University, and she’s got tanks full of more than 40 crabs for her research.

“I’m researching the effects of synthetic estrogen hormones on male fiddler crab,” she said, explaining that she is looking at the effects of the hormone in the crab’s natural environment. She collected the crabs on coastal Skidaway Island earlier this year for her research project.

Shirley is one of four panelists who will be speaking about how their experiences as alumni of the college’s PSLSAMP program have helped shape their career goals as they pursue their baccalaureate degrees and beyond. The virtual program will be presented at 1 p.m. Friday, Dec. 4. See it by clicking here.

Shirley’s interest in marine biology began as a child growing up in Jamaica, but it solidified during her Research Undergraduate Experience (REU) as an PSLSAMP scholar at Perimeter College, where she was awarded a research internship to work at Mystic Bay Aquarium in Connecticut.

“I wanted to be a vet at first and shadowed a marine veterinarian during my REU experience in Connecticut,” she said.

But watching seal autopsies made her change her mind.

“It’s not like I can’t stand blood, but I knew then that wasn’t for me,” she said.

Through the same REU, she was able to get a closer look at marine biology research. Research is now her focus as an Honors student at Georgia Southern University. She is completing her degree this May.

“I want to go to grad school, and I am thinking of marine conservation and resource management,” she said. “But I do plan on taking a gap year to work in a lab somewhere.”

“The goal of bringing alums back is to allow current scholars to see what former LSAMP scholars are currently doing,” Major said. “Even more importantly, I want them to know that former scholars are persisting in STEM pathways after transferring to four-year institutions.”

Awa Cisse has a habit of turning obstacles into opportunities. When she spent much of her youth in hospitals to deal with anemia and abdominal cysts, she decided to become a doctor.

Awa Cisse and Gideon Melvin have been awarded the Jack Kent Cooke Foundation’s Undergraduate Transfer Scholarship to attend the four-year college or university of their choice.

When the coronavirus pandemic threatened to sideline the summer research dreams of Georgia State University Perimeter College students, a team of science professors got creative and came up with a workaround.

Micayla Shirley spent part of her summer hanging out with beluga whales, penguins, jellyfish and other ocean creatures. She even got a peck on the cheek from a sea lion as part of her participation in a 10-week, marine biology Research Experiences for Undergraduates (REU) program at the University of Connecticut in Groton and nearby Mystic Aquarium.

Alana Burrell is studying computer engineering at Perimeter College. She recently completed research through the Perimeter College Summer Bridge program as part of her involvement in the Peach State Louis Stokes Alliance for Minority Participation program (LSAMP). She hopes to graduate with her associate degree in the spring of 2018.

Perimeter College STEM alumna (’15) Sheena Vasquez has been accepted to the doctoral program in biology at the Massachusetts Institute of Technology. She also received a National Science Foundation Graduate Research Fellowship to assist with her tuition. At Perimeter, Vasquez participated in the …

Omoruyi Ologbosere has his sight on someday becoming a dentist, but for a few weeks in May, he became a research scientist. Ologbosere is one of 13 students selected to participate in the intensive, three-week Summer Bridge Research Experience program at Georgia State University’s Perimeter …

CLARKSTON, Ga.—If you’re looking to buy a water purifier, you may want to check with a team of students at Georgia State University’s Perimeter College as you make your choice. The students and their faculty adviser spent several weeks researching the effectiveness of three commercial water filter pitchers, alongside a homemade one they created using a variety of ingredients that included charcoal, sand, gravel and rice. …

“Peach State LSAMP taught me to look beyond what may be commonplace or well expected, to dream big and understand that success is a culmination of skill, preparation and a discipline work ethic. Although I may have some inherent skill, LSAMP helped me define and refine what it means to be prepared and disciplined in my efforts.”

“I would not have discovered that I had a passion for research, if it weren’t for LSAMP. This amazing experience helped me to become a potential candidate for the MD/PhD program at Geisel School of Medicine at Dartmouth Medical School.”

“The research exposure has helped me to improve my ability to work with others, as well as my critical thinking abilities.”

“Looking back, I can honestly say that I would not have been in my current position had it not been for the unwavering support from the faculties, staffs and scholars of the Perimeter College LSAMP program.”

“It (LSAMP) has given me a unique background both academically and professionally. People read my personal statement and are blown away by the many things I accomplished through the LSAMP program (tutoring, mentorship, advising, research guidance, etc..