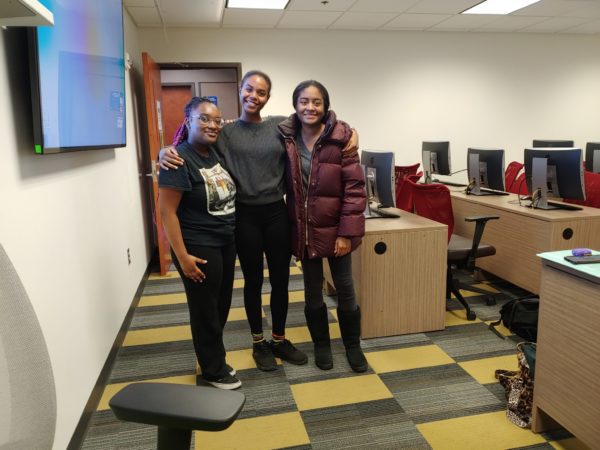 Members of the Perimeter College Girls Who Code Club

“You’ve got to figure out who your village is, and you’ve got to surround yourself with the people who want to help you be successful.” – Dr. Cynthia Lester

That advice was important to the members of the Girls Who Code Club who interviewed Dr. Cynthia Lester, interim Dean of Perimeter College during Black History Month. Their goal was to interview African American women who have had outstanding accomplishments in computer science. Lester is a professor of computer science with areas of expertise in software engineering and human-computer interaction. She joined Perimeter College in 2012 as the founding executive director of the STEM Initiatives Office. During this time, she helped secure and manage more than $3.5 million dollars to support the college’s faculty, students, and K-12 partnerships used to expand the science, technology, engineering and math pipeline by improving student success in STEM fields and increasing the number of students prepared for and enrolled in STEM degree programs.

In the video interview with the club, Lester was transparent about the challenges she faced while breaking into the field. However, nothing deterred her from pursuing her goals, she said.  One of the stories that stood out for the students was her work with IBM, when she visited a client at their workplace. She waited for the client in the lobby. When he arrived, the executive kept looking for the “IBM guy,” entirely overlooking her, she said. Despite the implication that having a woman in her position was unheard of and impossible at the time, she told the students that she handled the situation with poise and her head held high. The students were inspired to learn how she dealt with this and other obstacles as a minority in the field of computer science.

“You’ve got to figure out who your village is, and you’ve got to surround yourself with the people who want to help you be successful. Find three important people to help you in your career: A mentor who will tell you if you could have done it better; a coach who is going to make sure you take care of yourself emotionally, mentally, and physically, and an advocate — the person who has already achieved and wants to bring you along.”

“I am happy that there is someone like me in a position to help and motivate others,” she said.

Dr. Cynthia Lester is currently interim dean of Perimeter College. You can learn more about her background here.

Deepa Muralidhar is a computer science instructor and faculty advisor for the Perimeter College Girls Who Code Club. You can reach her at dmuralidhar@gsu.edu