It was 2006, and Denise Serrano had just given birth to her third child when she found out she had a rare form of leukemia. Now in remission, Serrano points to her two-month hospitalization at Emory Saint Joseph’s Hospital in Atlanta as a turning point in her life and her career.

She vowed that if she recovered, she would become a nurse. 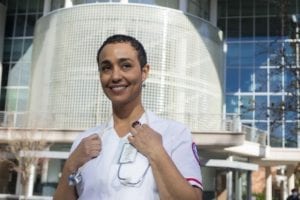 In December 2020,  her youngest child, now 14, and his siblings, watched virtually as Serrano, 45,  received her associate degree in nursing from Georgia State University’s Perimeter College. She already has secured a job at Wellstar Kennestone Hospital working in the critical care unit.

The pursuit of a nursing career follows a long-time passion for Serrano, who taught pre-kindergarten prior to applying to Perimeter’s nursing program.

“I always liked caring for people — I went to a trade high school in Massachusetts, where I studied nursing,” she said. “But I ended up going into education and was a pre-K teacher for 14 years.”

Then her illness struck. When she was 31 years old and her youngest son was 6 months old, she was diagnosed with acute promyelocytic leukemia, a blood cancer, and spent two months at Saint Joseph’s Hospital.

“I met some amazing nurses, and they treated me so kindly,” she said. “Without their guidance and their comfort, it would have been terrible. I had so much respect for what they did, and it really brought me back to the idea of going back to school to become a nurse. I knew that was exactly what I wanted to do.”

She battled leukemia for four years, but — when well enough — started taking classes at Perimeter College.

“I went back to teaching pre-K, but I would take a class here and there until I finished all my prerequisites,” she said. “I finally decided to go for it and apply to the nursing program after I finished microbiology. I took the TEAS (Test of Essential Academic Skills, required for all pre-nursing students) and found out I was accepted. I started the nursing program in January 2019.”

“I decided to get involved in the nursing association because I felt like I needed all the information about nursing I could possibly get — I wanted to absorb everything there was about nursing,” Serrano said. “Going to nursing school as a nontraditional student was rough. Nursing school is not like regular college, and you’ll be tested in many different ways.”

“But I’ve loved it,” she said. “I’ve met my new best friends, and we’ve gone through the roughest times, and we’ve studied together and supported each other. We’ve also had some really good, supportive faculty, and they were so wonderful and empowering.”

When the pandemic hit, some of the clinicals in Perimeter’s nursing program went “virtual,” but others did not. Precautions were taken. The nursing students performing clinicals wore personal protection equipment and masks and did not deal directly with patients who had the virus.

During this fall semester, Serrano worked as a nurse extern in a selective program that pays nursing students to work limited hours at particular hospitals. It was while working as a nurse extern at Wellstar Kennestone Hospital that she discovered her calling in critical care nursing.

Serrano has no illusions about entering into the nursing profession during this pandemic.

“It is scary,” she said. “But working during this time is helping us all prepare for the new normal. And frankly, if I didn’t care for them (patients with the virus), who’s going to care for them?” she said.

Serrano looks forward to working full time at Kennestone and anticipates a future where she can do mission work as a nurse in Central America.