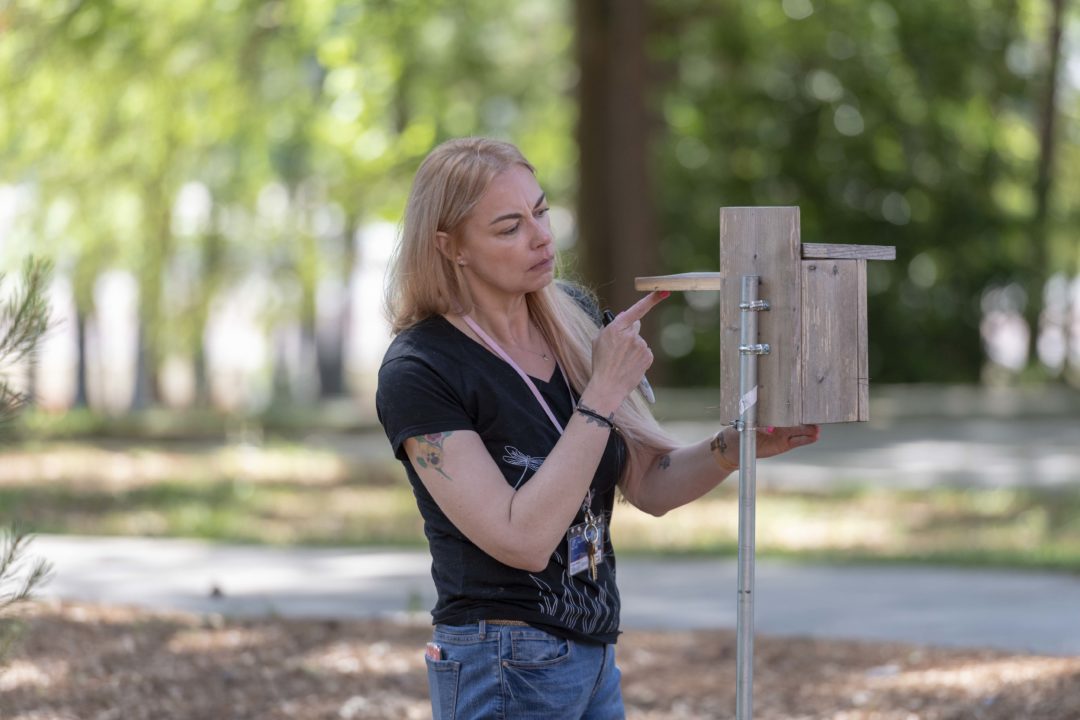 When the coronavirus pandemic threatened to sideline the summer research dreams of Georgia State University Perimeter College students, a team of science professors got creative and came up with a workaround.

Their plan made it possible for students enrolled in the college’s three-week Summer Bridge research program to receive research skills and instruction outside the traditional classroom and laboratory. Using remote video cameras, smartphones, Google Earth and social media, the students were able to analyze animal behavior and study their environments.

The LSAMP students worked  in faculty-guided research teams to understand the methods used by investigators to collect, analyze and interpret data, then presented their findings in oral or poster presentations.

Graves and Hollier supervised two projects focused on songbirds and their feeding, foraging, habitat and nesting activities. The groups of student researchers analyzed several years’ worth of previously collected nesting data on birds using birdhouses on the Georgia State campuses where Perimeter operates. One of these groups looked for spatial patterns in the nesting habits of the Carolina chickadee, and the other group created detailed maps of the study sites and completed habitat analyses.

Lahaise supervised a bird feeder group project for another group of students, transforming her backyard into a virtual lab, where she installed three hanging tray bird feeders (made of recycled plastic) about 6 feet off the ground. She filled the trays with sunflower and safflower seeds and installed a GoPro camera to record the feeding preferences of  birds, including cardinals, blue jays, sparrows and doves. Her students analyzed the videos as part of their remote research experience, to test the Optimal Foraging Theory, which attempts to explain behaviors associated with food choice and scavenging decisions in animals.

Kim led two students in research about disinfecting drinking water that involved environmental fluid mechanics, a higher-level subject that is taught at four-year institutions, he said.  Hydraulic mixing performance is the key factor in disinfecting drinking water. To study this, students tested the characteristics of a nappe flow, a high-velocity jet flow streaming into the water after passing over a barrier.

The students picked up raw materials from a home improvement store and put together a base structure and changed the water level for different case studies. To examine the water flow, they released a black food dye upstream. They made recordings with a smartphone camera and converted the results to digital data.

Kim said engineering courses that students took earlier at Perimeter prepared them for the research’s complexity and for their creation of 2-D and 3-D computer-aided design models that illustrated their understanding.

Daily check-ins via Webex let students ask questions about the data they were collecting, address any experimental challenges and prepare for their formal research presentations, which were conducted through video conference before other faculty and students.

“I did not expect such enthusiasm from the lower-level undergraduates,” Kim said.

“They learned that science is a team sport, with each member supporting the other, and that kept them engaged much like they would have been in a face-to-face environment,” Graves said. “Our research scholars were highly motivated and dedicated students, so engagement in a virtual space was never a challenge.”

Fanta Fofana, an engineering student, observed the feeding preference of different birds and worked on a hypothesis related to the Optimal Foraging Theory.

“Our research advisers were resourceful and approachable,” she said. “We didn’t get the chance to meet in person, but the most important outcome is that I had a good time learning things I never knew before.”

Summer Bridge at Perimeter College is funded by the NSF’s Peach State Louis Stokes Alliance for Minority Participation (LSAMP) program, which was developed to provide two-year STEM students with the research skills needed to apply for Research Undergraduate Experiences (REUs) at four-year institutions and research labs over the summer. The program has been directed by Margaret Major for 11 years.

“I’m grateful to my colleagues and administrators for their passion, creativity, ingenuity and hard work to create a remote research program to help our scholars maintain a sense of normalcy amid the pandemic,” Major said.