Andrea Hendricks always has loved working with numbers, breaking down puzzles and guiding others through tricky math equations.

For the past 25-plus years, through her class instruction and the textbooks she’s written, she has put that love of numbers to work, helping students at Georgia State University’s Perimeter College understand — and even enjoy — what she calls “the language of math.”

Her work has not gone unnoticed. Hendricks, an associate professor of mathematics and associate department chair for online math and computer science, recently was selected by the American Mathematical Association of Two-Year Colleges as a 2019 Teaching Excellence Award recipient.

The award is given in odd-number years for educators who have made outstanding contributions in mathematics or mathematics education at a two-year college. Selection is based on instructional effectiveness and support of students, professional involvement and professional development activities, interaction with colleagues and service to the college and the community. The award will be presented to Hendricks in Milwaukee in November.

“I’ve always loved working with numbers,” Hendricks said. “I can remember when I was in fifth grade, and I was watching my dad reconcile his bank statement with his checkbook, and he was off by a penny. He let me look at it, and I found his mistake,” she said. “I realized I liked math a lot — I never felt like I couldn’t do it.”

She credits “the best math teachers” in junior and senior high school for encouraging her and helping her to enjoy her math courses, from algebra through calculus.

Hendricks attended a small Christian college in Florida for her bachelor’s degree. There, she majored in math and earned a double major in mathematics and business administration.

“I honestly didn’t want to teach,” she said.

That changed when she learned she had a knack for it — a revelation that occurred while she was tutoring students in math at her college and later as a teaching assistant in graduate school at Florida State University.

“I loved it and learned I was meant to teach.”

While studying for her master’s degree in Pure Mathematics at Florida State, Hendricks met her husband, Todd, who also was pursuing a Pure Mathematics degree. They headed “north” to Georgia. Both have been teaching math at Perimeter College for more than two decades.

Hendricks said her heart lies in helping students who struggle with the foundations of math. She has geared many of the textbooks she’s written for college students who need extra support to succeed. She understands the main obstacles these students face and works to help the students thrive.

“A lot of people think, ‘I’m either a math person, or not a math person.’ They’re not taught that there is a language of math and you can develop a love for it,” she said. 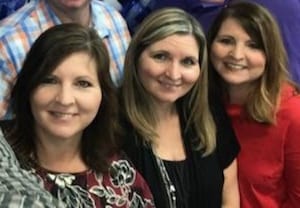 Maybe it was inevitable that Hendricks would pursue a career in math. She is a triplet, and she and her sisters beat the neonatal survival rate of multiples at the time.

“The doctor said we all had about a 50 percent chance of survival, and if we did survive, that we would have multiple developmental problems,” Hendricks said.

Even with the numbers stacked against them, the three girls beat the odds, and thrived, all pursuing facets of an educational career.

Outside of the classroom, Hendricks has authored or co-authored five textbooks primarily focused on developmental mathematics and a fully online interactive algebra textbook.

She also participated in the University System of Georgia’s Online Pre-calculus Emporium Revision Team, working with university system leadership and University of Georgia faculty and staff to redesign a pre-calculus online course that led to higher pass rates for students throughout the USG.

In 2018, she was recognized by her Perimeter College peers with the Cole Fellow award, the college’s highest honor for faculty.

“Professionally, it is humbling to be recognized by your peers and from colleagues from institutions outside of your own,” she said of the AMAYTC award. “I’ve had so many opportunities for growth and have been very supported throughout my professional career. I wouldn’t be here without Perimeter College, so it’s the college’s award too.”