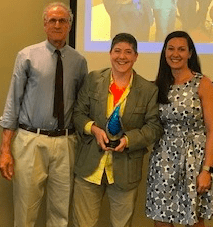 Dr. Rebecca Weaver has been named the first recipient of the Portnoy Prize for Outstanding Honors Faculty. Weaver, who was nominated by her peers, was recognized as the  Perimeter College faculty member whose “dedication to students’ academic achievement, intellectual acuity, and ethical development most clearly embodies the mission of the Honors College.”  She received the award and its $500 prize  during the inaugural Honors Faculty Retreat June 21 at Indian Creek Lodge in Clarkston. The award is named after Dr. Jeff Portnoy, former associate dean of Perimeter College’s Honors College. Weaver is an English professor on the Clarkston Campus. 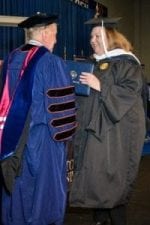 Tamra Ortgies-Young graduated in May, receiving her master’s in liberal studies with a concentration in history from Clayton State University. She also was honored by the Clayton State University College of Arts and Sciences with the 2019 Master of Arts in Liberal Studies Award for Academic Excellence. Ortgies-Young is an assistant professor of political science on the Dunwoody Campus.

Barbara Robertson has been selected as a University System of Georgia Teaching Fellow for the summer of 2019. Robertson is a political science instructor on the Newton Campus.

Kara Gardner was listed a top influencer in metro Atlanta in the May issue of the Atlanta Tribune. Gardner is assistant director of scholarships for Perimeter College.

Dr. Laurent Ditmann’s column on D-Day was featured in The Covington News.  Ditmann is the Fine Arts and Humanities associate dean and the associate dean of the Newton Campus.

Mark Flowers was appointed to the Conyers-Rockdale Economic Development Council by the Rockdale County Board of Commissioners. The appointment is for two years. Flowers is a professor of business and social sciences and business department chair on the Decatur Campus.